Those who were raised by corporations to strike the gods down with heavensunder, primed and bred for this only purpose. Trained from childhood, their entire lives revolved around godly murder, which they took to with a vengance. But in the aftermath of their sins, what has become of them? In the shadow of the apocalypse that they played a hand in, what of them remains? 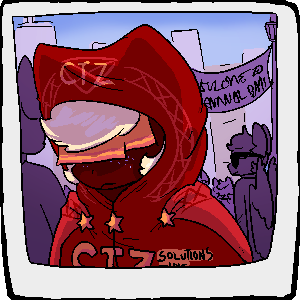 The legendary. Hushed whispers surround the Leech - who, even for a hunter, was notoriously private and reclusive. Many suspected their obsession with privacy to be a result of their impressive killcount, fearing that revealing their identity or location would bring vengeful gods to slit their throat in their sleep. They were the beginning and the end - killing the first Chaotic, Ysaase, and the last Harmonic, Satetwer. Though they were occasionally flanked on hunts by assistants, they rarely needed their help.

None have heard of them since the World's End. They are presumed to have perished in the apocalypse. 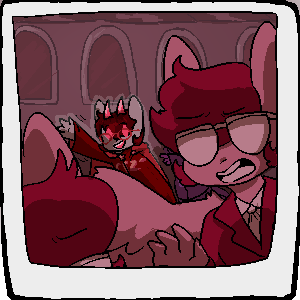 Star of the East

Though the Star was a formidable hunter in his own right, he truly shined as the Leech's closest companion. The two always appeared together in rare public events, with the Star the vastly more talkative and engaged of the two. He preened under the spotlight, seeking a coveted status of being always on the Leech's coattails. Indeed, the Star's count is only a hair beneath the Leech's - and he downed the most Harmonics and Chaotics after he.

There have been some sightings of the Star in the post-world, but nothing definitive. 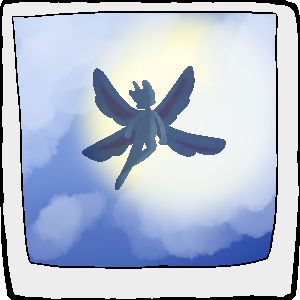 A curt, brutal, and efficient killer, Godscourge was one of the first truly successful hunters. They purged lesser gods with ease, striking them down effortlessly. They were often contracted to work for other corporations than their owner-corp, and was notable for being the first hunter that could be hired by anyone wealthy enough to afford the price tag. Some said that they were jealous of the Leech as the other's skill and fame overtook theirs.

They are well and alive in the new world, serving as hazard and threat to the Standing City. 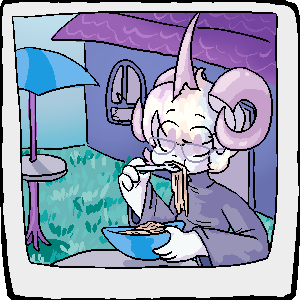 Diviner was the only other hunter to successfully fell a higher being - a Harmonic or Chaotic. Before such a feat, they were considered a failure - with their parent company, Iritan Industries, often renting Godscourge, the Leech, or the Star instead to provide for their executives. Diviner's seemingly-random kills brought attention back onto them, which they notoriously hated. They refused to answer interview questions and/or verbally abused journalists that approached them.

They are confirmed alive, living in South Coast City and working as the major practical mage of the area. 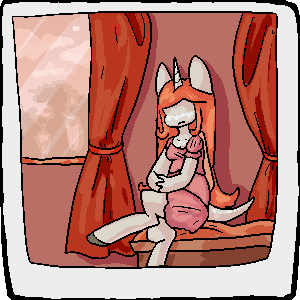 Though not the most efficient hunter, Harvester Red was the cream of the crop for Iritan in terms of quantity. Noted for being serious, cold, and methodical, tales were spun of how intently she would stalk lessers and prep for a killing, which contributed to her mid overall count but meant she never failed a mission. Harvester was supposedly planning on removing one of the remaining Harmonics, but Sea's Diviner beat her to the punch - which she took great offense at, and the two had a public argument that nearly escalated to a fight.

She has not been publically seen since that fight, but there are rumors of her presence in the eastern mountains in the post-apocalypse. 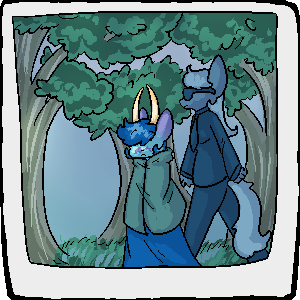 View of the Sunrise

Favorite drink? "There was this nice local food stand that sold these, almost frozen lemonade smoothie things. I used to eat them all the time."
Favorite holiday? "Ahaha, maybe Give Thanks Day?"
Favorite Industries of Tomorrow product? "I mean... do I count?"

View became active around the mid-waves of god-hunters, and was considered a promising hunter due to hailing from Godscourge's parent company, Industries of Tomorrow. He indeed claimed many lessers, and was one of the most active in the media, giving interviews and some demonstrations. Possibly due to this, he and Godscourge were notorious rivals and near-enemies - though View never spoke poorly of Godscourge, Godscourge often berated his nonchalance regarding their work and eagerness for public attention. View often countered with, simply, "I'm a Zlimi."

View is confirmed alive and founded South Coast City, which is maintained as a relatively stable trading hub with the help of Sea's Diviner.

Tape PNG is from here.